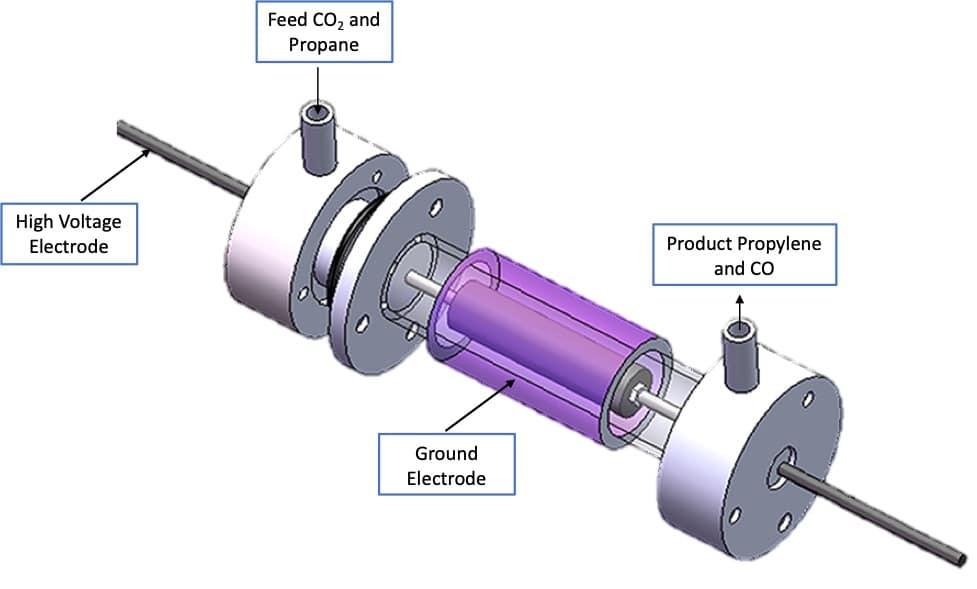 Steam cracking of alkanes emits around 1 tonne of CO2 for every tonne of olefin (ethylene/propylene) produced. When naphtha is used as the feedstock, 2.5 tonne of CO2 are emitted for every tonne of olefin product. The global CO2 emissions from production of ethylene and propylene – the two most used industrial petrochemical feedstocks – is of the order of one billion tonne of CO2. Furthermore, the current ethylene and propylene production technologies are large scale chemical plants using economies of scale to minimize capex per unit of product and od not lend themselves for distributed production. With advent of shale gas, ethane and propane are widely available low-cost feedstocks in US. Since these feedstocks are distributed, there is a critical need to develop modular systems which can utilize CO2 as an oxidant for this conversion and use renewable electricity for providing endothermic heat of reaction to reduce overall CO2 emissions.

Susteon is developing a novel catalytic non-thermal plasma (CNTP) technology utilizing metallic/bimetallic catalysts in a commercially scalable reactor design. Our process utilizies CO2 as a soft oxidant to produce ethylene and propylene from ethane and propane, respectively. The key step in this conversion is the plasma assisted catalytic conversion of CO2 to CO and oxygen radicals at low temperatures. These oxygen radicals subsequently react with ethane/propane and break the C-H bonds to form ethylene/propylene through well-known oxidative hydrogenation chemistry. Scaling from the laboratory to bench, pilot and commercial scale would be straight forward by employing multiple reactor tubes with the same dimensions due to the modularity of this technology.

Initial life cycle analysis (LCA) indicates that this process can utilize 0.92 tonne of CO¬2 per tonne of olefin products when renewable power is used. The CO2 avoided is thus about 3 tonne per tonne of olefin product from the steam cracking process. If this process is used to produce 50% of the projected 2030 olefin capacity (224 and 165 million tonne of ethylene and propylene respectively), at least 500 million tonne of CO2 emissions can be avoided, which amounts to roughly 30% of industrial CO2 emissions in the U.S per annum. This CO2 can come from large point sources (power plants, cement and/or other industrial sources) or from direct air capture. The modularity of this technology allows distributed production of these products using cheap and abundant ethane/propane from shale has production.